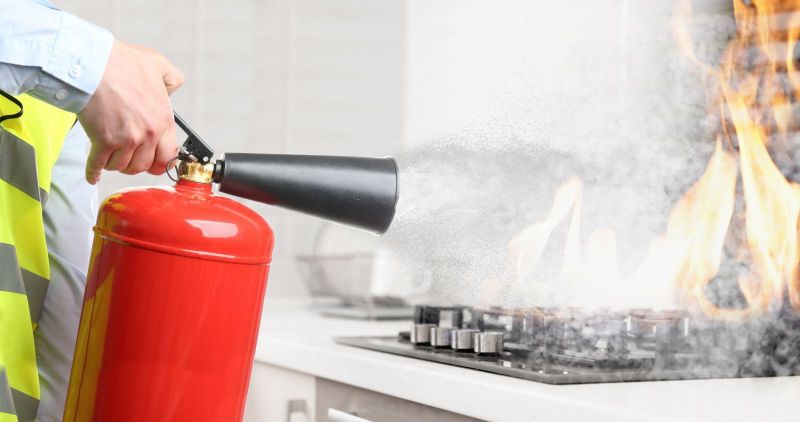 It's a dangerous world, and we're not always fully aware of how to stay safe.

Fire is one of the most common household dangers, with an average of 15% being caused by cooking. A kitchen fire can happen in seconds and leave you with severe burns.

Fire is caused by a chemical reaction that converts fuel into heat. The most common fuel sources are solid, liquid, and gaseous fuels. The biggest threats to your safety are usually in your home, and you must know how to prevent fires to keep yourself and your family safe.

WHO statistics show that 5 million people die yearly from household air pollution caused by cooking with solid fuels such as wood or coal. These cause nearly 12% of deaths from asthma, pneumonia, and other lung diseases worldwide in children under five years.

The most common cause of kitchen fires is incendiary devices. These devices include frying pans, toasters, microwaves, and more. Kitchen fires are the most common cause of fire deaths in the United States. According to The National Fire Protection Association (NFPA), 61% of cooking-related fires in U.S. homes are caused by cooking equipment issues. The leading factor is a misuse of equipment, followed by failure to clean equipment properly or replace damaged parts or worn-out wiring. Another major factor that contributes to fire deaths is unattended cooking.

A space heater is any portable heating device used to warm a small area, such as a portable oil-filled radiator, electric space heater, or kerosene heater. In 2016, an estimated 5,500 fires in residential properties in the United States resulted from using space heaters. Space heaters account for nearly 20% of fatal home fires among children aged 0 – 14 years and nearly 9% of fatal home fires among adults aged 65 years and older. Like most other residential fires, most home heating fires are caused by failure to clean or repair equipment. It is also important to remember that space heaters can be a significant fire risk if not properly used or maintained.

Faulty wiring and overloaded circuits are responsible for about 18% of home electrical fires yearly. The most common causes of electrical fires are faulty wire connections, damaged insulation, loose drywall, loose cords, exposed wires, and overloaded circuits. Electrical wiring is one of the leading causes of accidental injuries to children under the age of 15. It is also one of the leading causes of fatal home fires among children aged 0 – 14 in the United States.

Failed refrigeration systems are responsible for about 15% of U.S. refrigerator fires yearly. Leaks, short circuits, and plugged-in refrigerators with blocked drain holes are some of the most common causes of refrigerator fires. If a large amount of methane gas is allowed to build up in a refrigerator, it can explode and cause severe injuries and death. In 2016, there were an estimated 1,100 residential fires in the U.S caused by faulty refrigeration equipment. It makes it the second-most common cause of residential fires after electrical equipment. Open flame cooking also is a significant fire hazard and can result in severe injuries and even death. In 2015, an estimated 5,200 home kitchen fires in the United States were caused by open flame cooking. Open flame cooking refers to any activity that involves igniting a burning substance with direct contact with a flame, such as candles, Christmas trees, or barbecue grills. Cooking with an open flame is also one of the leading causes of fatal home fires among children aged 0 – 14 in the United States. Open flames also account for 21% of smoke alarms triggered by cooking.

There is an ever-increasing need for fire safety education, especially regarding children's exposure and risk. Inflatable furniture can increase the risk of death by 40%. If a fire occurs while sleeping on an inflatable cushion or mattress, the cushion will "squish" into the child's body, resulting in death due to asphyxiation. The NFPA recommends that parents keep any inflatable items unoccupied when unattended. Children should be supervised and not allowed to sleep on these items. In addition, all swimming pools should be inspected annually by trained personnel to prevent any leaks or other safety issues.

It would help if you had fire extinguishers on every house floor and in areas with known fire risk, such as kitchens and bathrooms. Children and infants are at a higher risk of starting a fire than adults because it takes less time for them to start a fire. Be sure that everyone is familiar with the use of fire extinguishers, along with what they do while being used. It can help save your home from burning down, if possible.

What Our Clients Say

God bless each of you and your company. We were impressed by the professionalism of your employees’ demeanor. They were very polite and helpful (and patient regarding our many questions).

They always dealt with the situation immediately! Every time I called TruRenu, they quickly got back with a response.

TruRenu were phenomenal! They helped us get back to normal as quickly as possible. They were professional, here on time every morning, and cleaned up behind themselves daily until the job was complete.